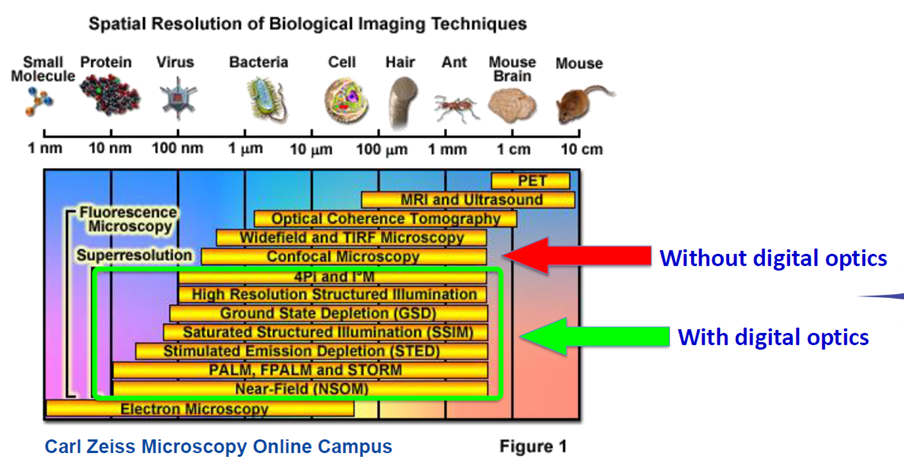 The “twisted light” is an interesting concept which has enormous applications in advanced research fields like Super-Resolution Microscopy and optical computing.  The idea behind the twisting of light is very simple.  Light is an electromagnetic wave, it can be linearly polarized (possess linear momentum) and circularly polarized (possess spin angular momentum). Let us consider the cross-section of a wave perpendicular to its direction of travel, then the cross-sectional area contains oscillating mini waves having varying phases, rotating around the centre and possess orbital angular momentum (OAM). The OAM property of the light plays in the “twisting of light”. The normal prototype, in this case, is the freely propagating twisted beam referred to as optical vortex beams (OV).  There are several methods to generate OVs; Computer Generated Holograms (CGH) is one among them which are created by Spatial Light Modulators (SLMs).  SLM is a digital optical liquid crystal device that is controlled by a computer. Digital optics changed light manipulation and imaging in an unprecedented manner. LCoS-SLMs are just miniature liquid crystal displays having micro pixels which can modulate the phase/amplitude of a wavefront. Let us see how a SLM differs from traditional lens optics in the case of generating OVs.

In microscopy, SLMs can play various roles. At the very basic level, without specialized hardware components, all traditional methods of classical microscopy can be realized by displaying the corresponding illumination and/or Fourier filter masks on a suitable SLM system. Let us see how can we exploit the great potential of digital optics through SLM in Optical Microscopy. SLM may display a diffractive optical element or DOE to reshape the illumination beam.

Our wide range of LCoS-SLM product lines meets your needs in twisting of light most effectively and effortlessly.  Our product categories are designed for Amplitude/monochrome (ARK) and Phase (SRK) applications in a selectable range of wavelength in 2K resolution (1920 x 1080 pixels) and 4K resolution (4094 x 2400 pixels).  We are interested to collaborate with various labs for the development of new prototypes in optical microscopy and we can support you for better image acquisition in various optical microscopy techniques.